The difficult quest for long-term alpha after fees 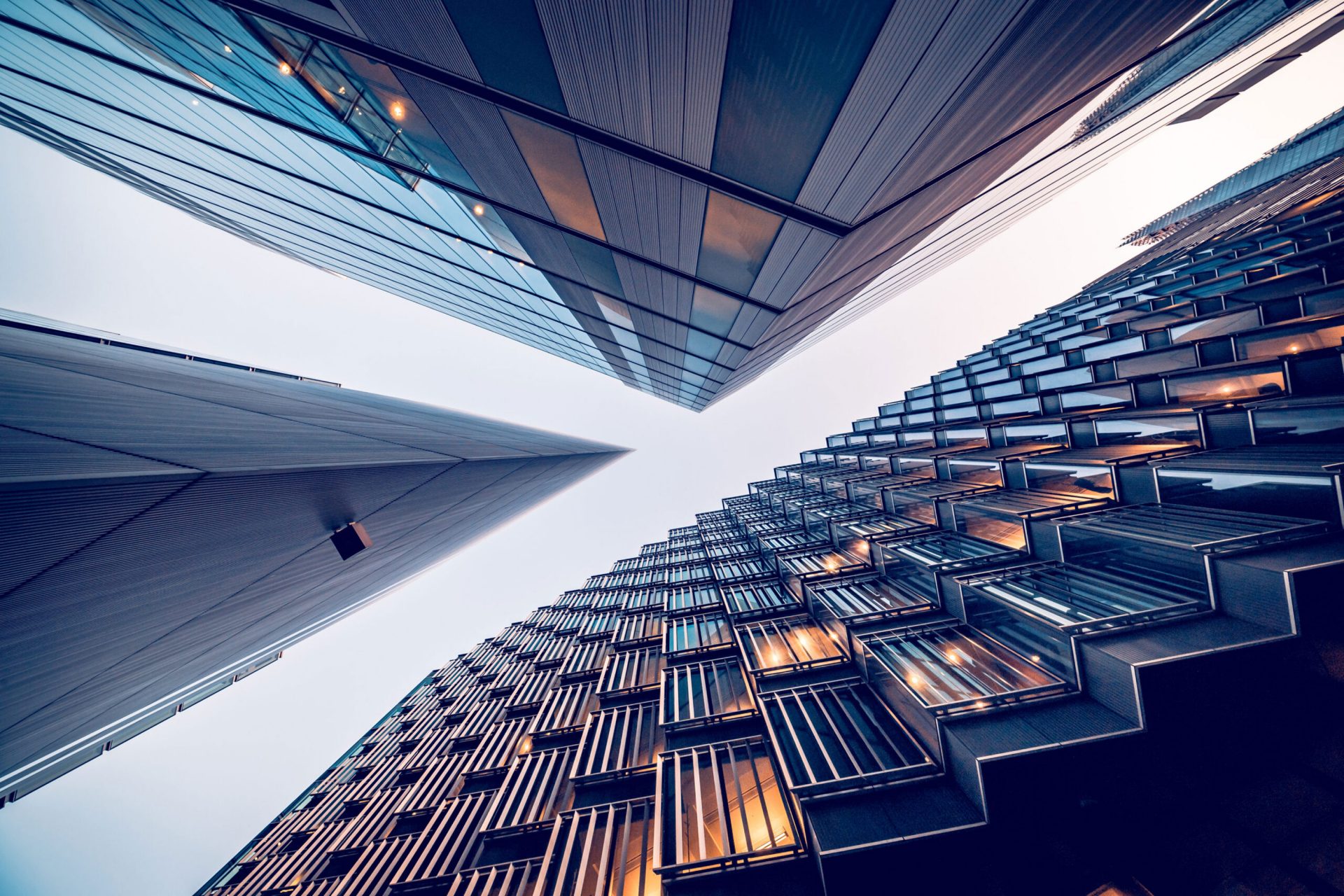 Experience and academic research indicate that it is difficult for even the most skilful fund managers to produce net (after fees) alpha over the long term. Hyperion has produced net alpha since inception across its three key products. This is rare and valuable. We believe we are well placed to continue to extract long-term alpha after fees across all our products including the Hyperion Global Growth Companies Fund.

Many active fund managers fail to outperform the relevant benchmark over the long term, particularly after fees. In addition, many active managers have high average rates of portfolio turnover that can result in higher trading related costs, higher income tax expenses and higher short-term capital gains tax expense than would be incurred using more long-term or passive investment styles. High portfolio turnover levels and negative long-term alpha generation are the key reasons for the secular trend towards passive or index-based equity investing. However, by indexing, investors’ risk forgoing the extraordinary benefits of compounding above benchmark returns over the long term.

The magic of compounding superior after fees returns over long time periods is illustrated in the chart below. Since October 1996, the Hyperion Broad-Cap Equities Composite has returned approximately 13 times the original investment (after assumed fees of 95 bps per annum). This return from Hyperion compares with the S&P/ASX 300 Accumulation Index return over the same time of less than 7 times. As at 31 January 2019, this strong long-term investment performance of the Hyperion Broad-Cap Equities Composite equates to average excess returns above the benchmark of 4.4% pa (pre-fees) over almost 22 years. 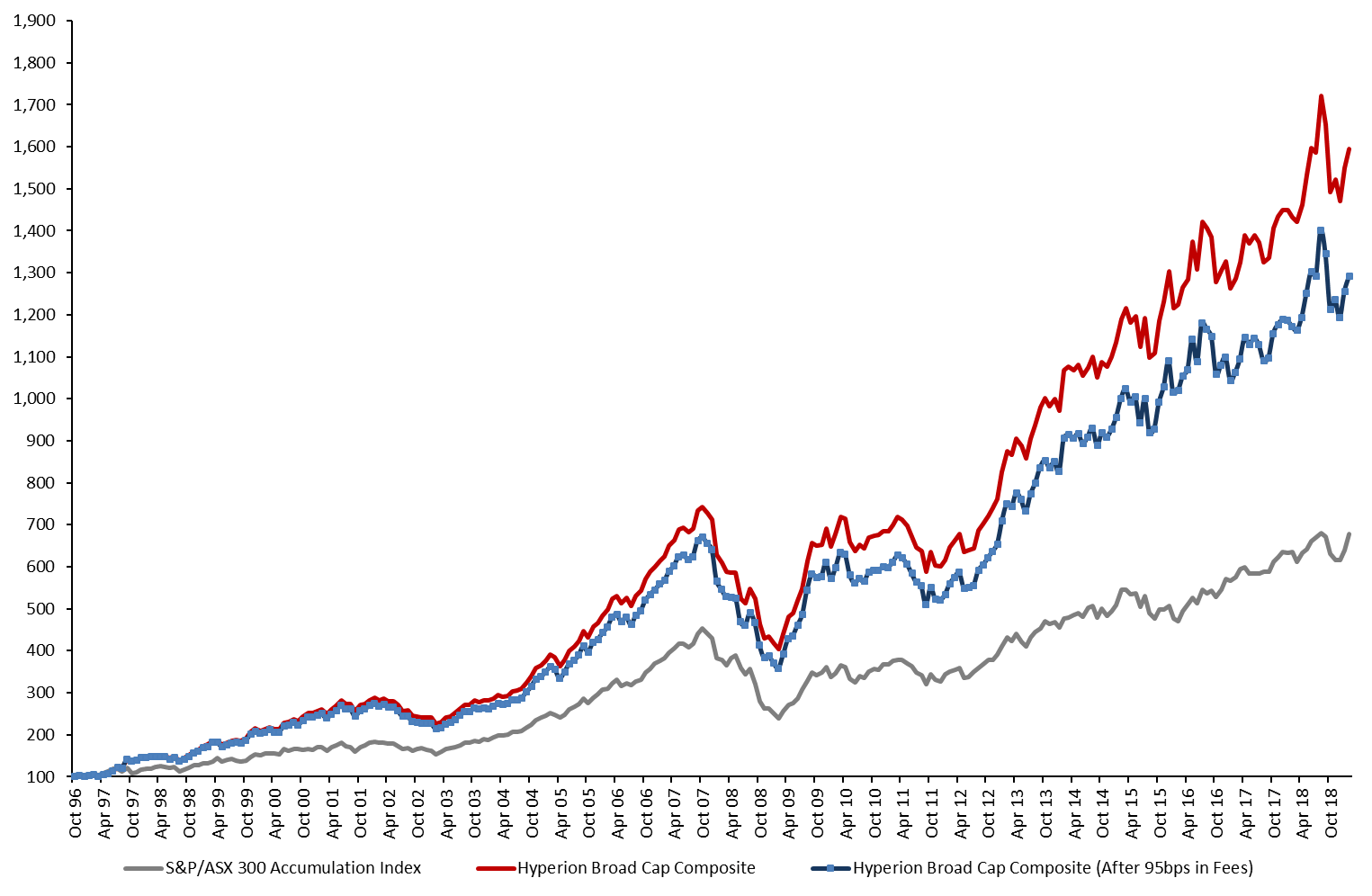 Since inception in May 2014, the Hyperion Global Growth Companies Fund has produced 9.4% pa alpha (pre-fees) and 6.9% pa (after fees).

The wisdom of crowds makes the market a difficult competitor over long time periods, as history suggests the ‘average view’ is better than that of an individual. Hyperion has historically identified multiple market inefficiencies and we strive to continue to exploit these going forward, including in the Hyperion Global Growth Companies Fund. 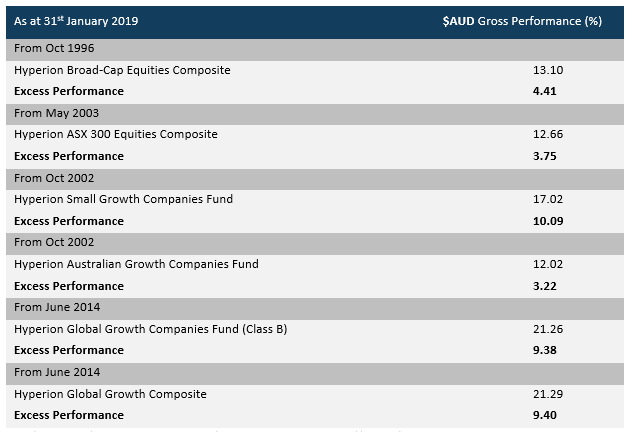 Annual performance, pre-fees, as at 31 January 2019. Past performance is not a reliable indicator of future performance.

Research suggests some managers have the skill to produce long-term alpha before fees but the cost of producing this alpha is too high, resulting in net alpha that is typically negative. The ‘paradox of skill’ is that as the skill and quality of the analysis of investment professionals has risen, the ability to produce strong excess returns of yesteryear is much more difficult. Put simply, competition has intensified. In fact, the world is moving towards a winner takes all competitive dynamic, whether it’s in investing, business, music or sport. Winnings accrue to a few whilst the clear majority comprising average products and services are in various stages of economic failure.

Fees and low trading costs reduce this alpha hurdle and improve the probability of translating gross alpha into net alpha. Mauboussin suggests that costs are a key factor in separating the best from the worst performing investment funds. The Hyperion Global Growth Companies Fund has a base management fee of 70bps pa. We believe this fee is lower than most of our peers. A performance fee in the Hyperion Global Growth Companies Fund of 20% of outperformance against its benchmark ensures Hyperion does well when the unit holders do well. The performance fee is subject to high water marks and is only payable on positive absolute returns.

Hyperion’s stock portfolio turnover is typically in the 20% to 40% pa range, which is well below the market and the typical fund manager. Low portfolio turnover helps improve our clients’ after-tax and after transaction cost returns. This is in stark contrast to many active fund managers that have extremely high turnover because they are trying to chase short-term alpha. Chasing short-term alpha is extremely difficult to achieve successfully over long time periods and can be expensive in terms of after-tax and after-cost returns.  The avoidance of over-trading is another way to lower the cost hurdles needed to produce net alpha. We believe we do some simple, logical things that increase our odds of out-performing.

Alpha is a zero-sum game where the winners (out-performers) are accruing returns at the expense of the losers (the under-performers). In order to out-perform, the mistakes of others need to be exploited. Historically the ‘victims’ were individuals or some poor performing institutional funds. However, investors that tend to perform poorly eventually give up. According to Larry Swedroe and Andrew Berkin in their book “The Incredible Shrinking Alpha”, U.S. households held more than 90% of U.S. corporate equity at the end of WWII. This declined to 48% by 1980 and 20% by 2008. Similarly, institutional funds struggle to survive, and dollars flow to passive managers. Swedroe and Berkin also cite research from John Bogle who found that about 7% of mutual funds ‘died’ each year between 2001 and 2012.

Evidence suggests the proportion of professional investors accruing alpha after fees is shrinking. Larry Swedroe and Andrew Berkin, referenced academic studies by Mike Sebastian and Eugene Fama that suggest that only the top 1% to 2% of funds showed statistically significant skill (alpha). Charlie Munger, the Vice Chairman of Berkshire Hathaway, has been widely quoted over the years, including in Tren Griffin’s book, as saying “the top three or four percent of the investment management world will do fine”. The proportion of participants achieving net alpha has declined over time. However, we believe the number of winners will be higher in certain markets. For example, small cap funds can exploit the under-research of small or illiquid stocks as well as avoiding those stocks that eventually ‘blow up’ from speculative or ill-defined business models. However, it is extremely difficult to achieve sustained, meaningful alpha in the small cap space because of this lack of liquidity. With limited opportunities, the absolute dollar size of the alpha is highly constrained in the small cap space.

Global funds should be able to exploit specific factors, sectors and stocks in a huge universe of tens of thousands of listed securities. However, it takes skill and insight to filter and analyse such a large universe effectively. You also need to be clear on what inefficiencies your investment process and team can exploit.

Hyperion exploits multiple market inefficiencies and behavioural biases including short-termism, time arbitrage, recency bias, loss aversion, impatience (driven by a combination of the fund managers themselves and their direct intermediary/institutional and/or retail clients), over diversification, specialisation biases, herding (including fear of being wrong or being perceived to be wrong by third parties), and the ‘quality anomaly’.

Achieving alpha has become difficult, but there are some reasons to be optimistic as to why accruing alpha could become easier over time. The ever-increasing focus on short-term results, catalysts and share price movements ensures those that take a longer-term view tend to be competing in a much less crowded space. Growing data availability, accountability, measurement, transparency and specialisation are perversely increasing short-termism in the market. The trend towards indexing and passive investments means the proportion of ‘dumb’ money is rising. Eventually the level of analysis and insight on individual stocks is likely to decline and lead to increased mispricing of stocks. It is likely that a new source of ‘victims’ will eventually emerge.

In conclusion, Hyperion has a long track record of producing consistent long-term alpha after fees when league tables (after adjusting for fees and survivorship biases) and academic studies suggest most funds are unable to produce similar outcomes. Long-term alpha generating track records are valuable and meaningful. We believe the Global Growth Companies Fund is worthy of consideration by investors.