Home News The death of the value anomaly in a low … 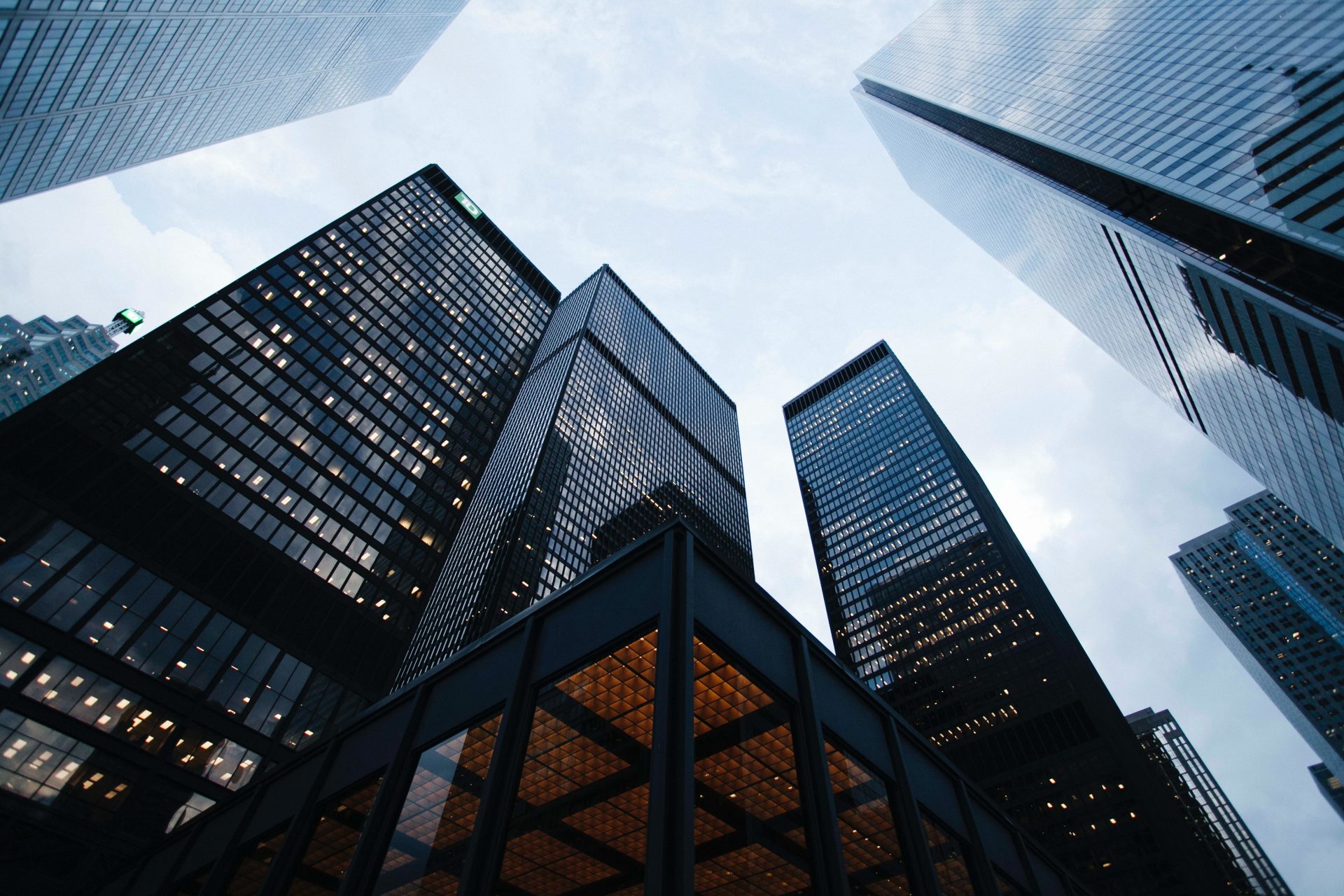 Traditional value investing typically relies on investing in average businesses that are heavily reliant on a strong economy for compounding earnings growth. Hyperion Asset Management (Hyperion) believes structural macro headwinds mean economic growth and overall earnings growth will be very low over the next decade in most major economies.

The value effect (anomaly) was identified in numerous academic studies that focused primarily on the period from around World War II (WWII) up until the Global Financial Crisis (GFC) in 2008. [1] These academic studies found that buying portfolios of stocks with below average price to book (P/B) ratios or price to earnings (P/E) ratios resulted in alpha generation that could not be explained by the efficient market hypothesis. The period that the value anomaly was identified by the academic studies was a very strong period of economic growth in both the U.S. and in most major economies. The combination of extremely low oil prices (except for two relatively short periods from 1974 to 1983 and 2006 to 2008), the commercialisation of a broad range of technological advances in the early to mid-20th century, a growing middle class (in developed economies up until the late 1970s), increasing female participation in the work force and young growing populations, resulted in an extraordinary period of economic growth.

Figure 1: U.S. real GDP growth was strong from WWII until the GFC 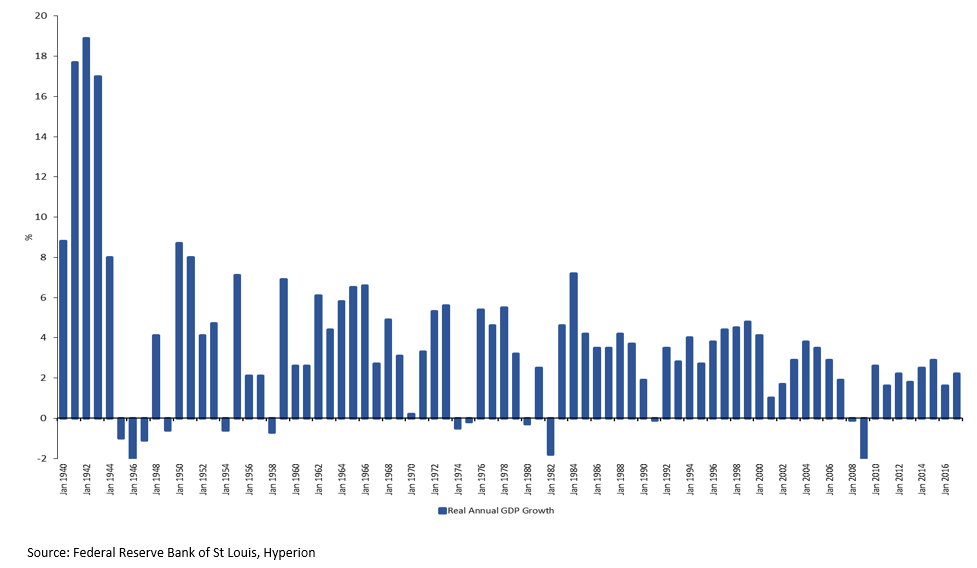 The period from WWII to the GFC was a period of very strong economic growth (refer Figure 1). It was also largely a period of benign competitive intensity with low levels of technology-based disruption. It was a period where average businesses selling average products to middle income consumers could perform reasonably well. Not only because consumer demand was growing and technology related disruption was low but also because many of these businesses could lower their costs by outsourcing manufacturing and other services to low wage emerging markets. It was also a period of corporate consolidation, supported by declining borrowing costs, where an average or poorly performing business had a reasonable probability of being taken over.

Traditional value investors tend to focus on investing in average businesses that are heavily reliant on the overall economy. If the economy grows strongly, then the average business tends to grow strongly. However, if the economy experiences low or negative growth, these businesses tend to suffer badly. The profits of these average businesses are highly leveraged into economic growth because they normally have significant operating and financial leverage. An average business can usually grow its sales organically in line with nominal GDP. With the help of operating and financial leverage, it can then grow its profits above the rate of sales growth. However, in a lower growth economy, the average business suffers because it has not spent heavily on improving and innovating its product set through R&D and thus finds it difficult to grow its sales above the rate of overall industry growth. In addition, in a low growth economic environment the competitive intensity of most industries tends to increase placing even more pressure on the profitability of average and below average businesses.

The value anomaly has disappeared since the GFC (see Figure 2) because the rate of economic growth has slowed, and the competitive intensity has increased in most industries. Lower levels of economic growth have forced businesses to act more aggressively in order to boost sales. In addition, the general level of technology-based disruption has also increased substantially over the past decade. The development of the internet and use of smart phones have fundamentally changed consumer behaviour and disrupted many traditional business models. Finally, these average businesses are generally capital intensive without substantial pricing power and thus need to use debt to boost their return on equity. Many of these businesses were forced to undertake highly dilutive equity raisings during the GFC at very low prices. These forced equity raisings were highly dilutive to EPS and portfolio returns. 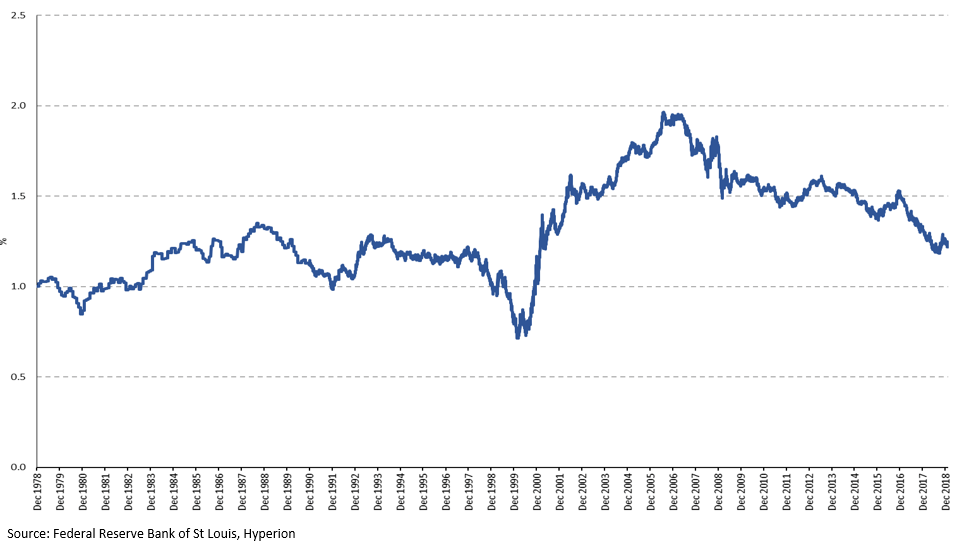 Traditional value investing generally relies on predicting short-term P/E movements within historically observed ranges. This applies directly to the company being considered for investment and a set of identified comparable companies (‘peers’). For historical P/E averages or ranges to be meaningful, the underlying earnings and intrinsic value of an average company needs to rise over time and the P/E ratio needs to mean revert. This P/E ratio reversion typically relies on steadily growing corporate profits, underpinned by growing credit and consumption across the economy and ongoing scale and productivity benefits. It is also reliant on profits not permanently declining over time (classic ‘value traps’). For example, if a stock is trading on a P/E multiple of 12x relative to its long-term average of 15x, a value investor would look to purchase the stock at a 20% discount to its long term average (for a potential 25% gain) with an expectation that the multiple will ultimately revert to its historical average (by increasing 3 P/E points) and the earnings of the business will also grow in the future. If share prices are rising over time in a growing real economy and nothing has structurally changed with the business model, management team or industry structure, then this P/E arbitrage approach is rational. However, if earnings growth moderates or there is market disruption, mean reversion becomes harder and value traps emerge more frequently where share prices remain permanently depressed. Following the GFC, the return on equity of average and below average companies has been declining because of increasing levels of disruption (Refer figure 3). In a low growth economic environment, the competitive intensity tends to increase because the businesses continue to try to grow their sales and profits at historical rates even though the economy is growing at lower than historical rates. 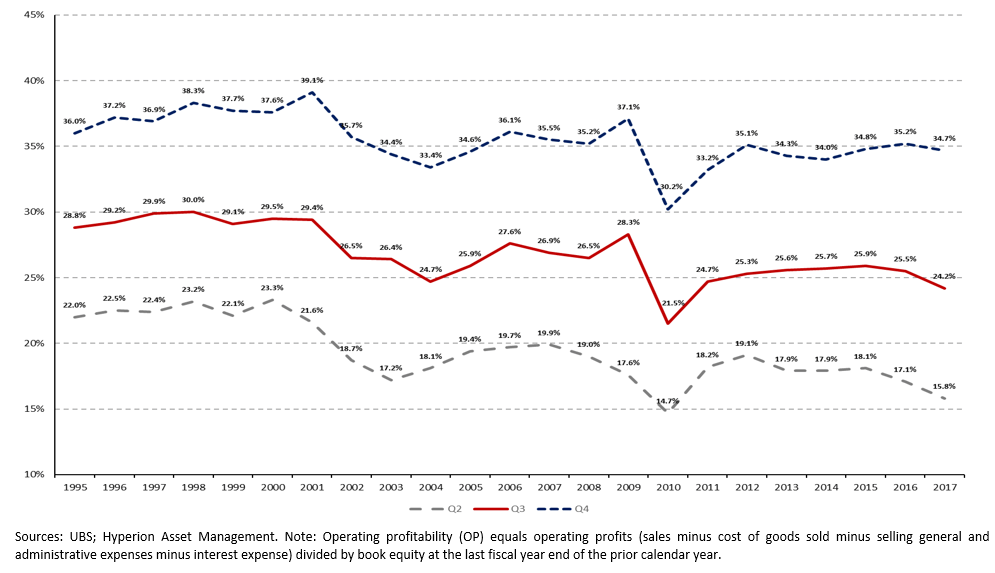 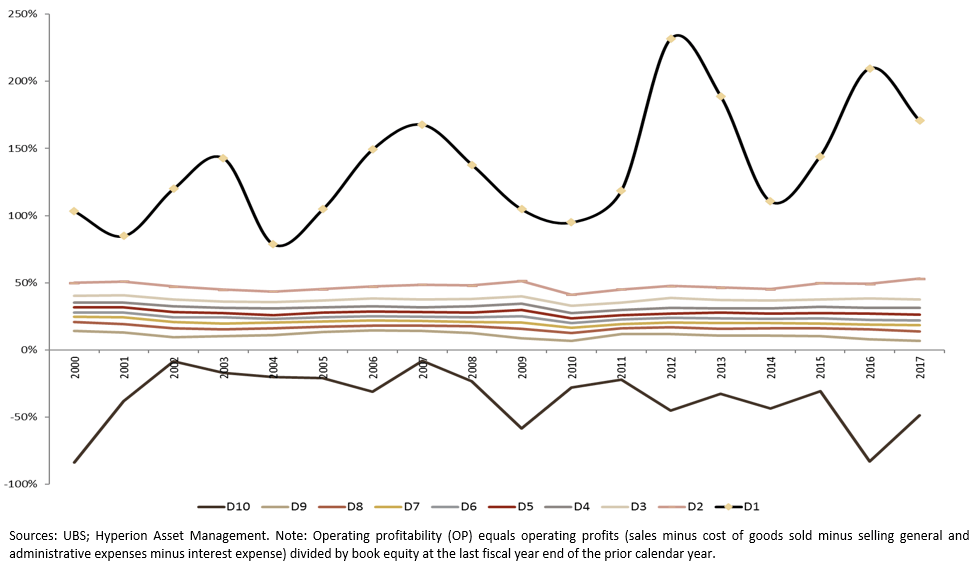 Historical P/E ranges are not relevant if the long-term earnings outlook of the company is deteriorating through time, as the current P/E will remain depressed as the earnings outlook of the business continues to deteriorate resulting in a significantly lower intrinsic value. In our example, the correct P/E may be 9x resulting in a 25% decline in share price rather than the anticipated 25% gain. In addition, if the earnings are declining then the capital loss will be enlarged because a depressed P/E will be applied to progressively lower EPS figures through time. If the business has debt, then the equity value of a structurally challenged business can quickly decline to zero if the bankers get nervous and call in the administrators – at this point the P/E does not exist and neither does the equity value. Traditional, low P/E value stocks did not provide capital protection in the GFC. Earnings for many businesses proved to be illusionary while their high debt levels persisted. Many of these ‘cheap’ low P/E businesses never recovered.

Hyperion is focused on long-term intrinsic valuations, not short-term heuristics. We estimate the intrinsic value of a business by estimating its long-term free cash flows. This requires adopting a ten-year time horizon. This is in line with our average stock holding period of ten years.

In conclusion, simple short-term value heuristics such as low P/E or P/B ratios are not likely be effective in a structurally low growth and disrupted environment. Conditions need to be supportive or at least steady for mean reversion to hold. If companies are losing market share or their business model is being fundamentally challenged, historical ranges will no longer be relevant. This is when value traps emerge and share prices can remain permanently depressed. We believe qualitative analysis is becoming more important in a low growth world. Attractively priced companies with the ability to compound earnings and free cash flows over long time periods will generate substantial alpha.