Home News Natural resources are finite, and so is …

Natural resources are finite, and so is global economic growth 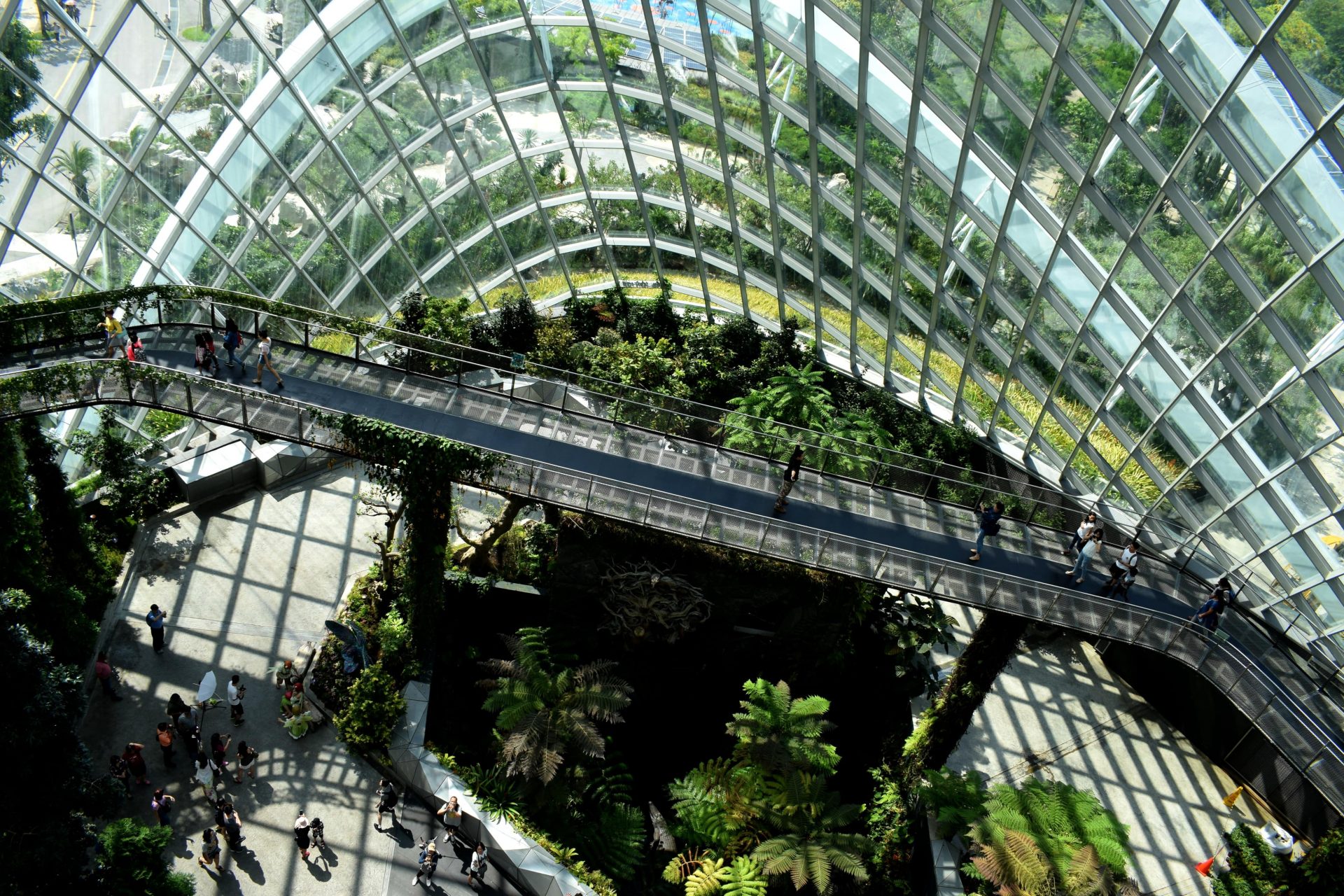 We believe limits to natural resources, and the effects of climate change may well prove to be the biggest structural headwind the global economy faces, but the sad truth is that most economists and politicians are reluctant to talk about it – because it is the most difficult to solve. Put simply, in a world of finite resources, humanity cannot continue to grow GDP at high exponential rates over the long term,  because key resources are finite, and because we have already significantly and permanently damaged our fragile biosphere.  Carbon dioxide (CO2), emissions from fossil fuel use, unsustainable farming practices, water and land degradation, over-fishing and extinction of species[1] are all contributing to the destruction of our planet.

However, at this time, climate change is the most pressing of the natural resource constraints and is the focus of this thought piece.

However, it’s important to note that growth in the global economy has not always been so rapid.Prior to the First Industrial Revolution, the economic growth rates of the world economy were very low. The CAGR in the world economy from year 1 to 1820 was approximately 0.1% p.a.[5] The comparison between the low rates of economic growth prior to the First Industrial Revolution and the exponential growth since then are shown in Figure 1. 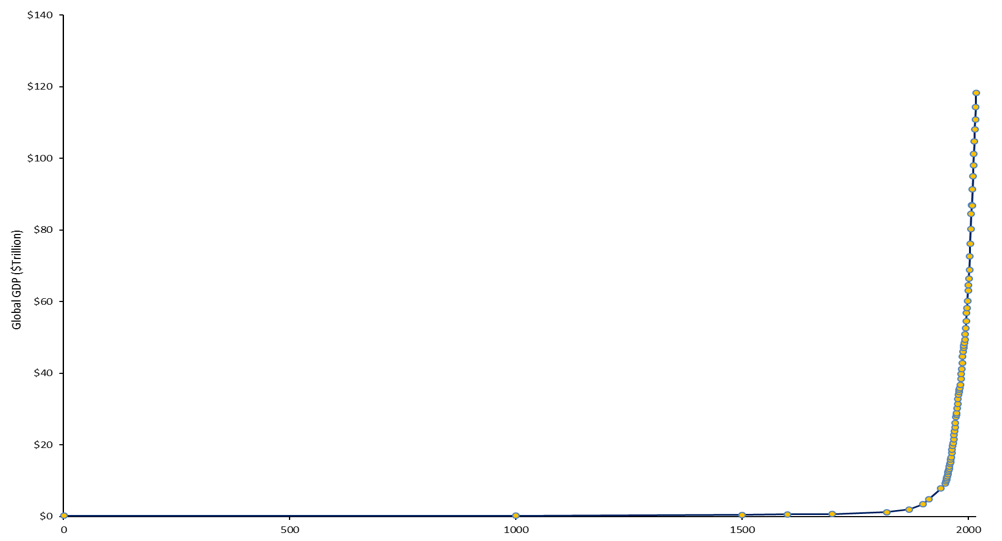 Consumerism –  an unintended consequence of growth

At present, the global economy is dominated by consumer demand and the rise of consumerism. This is a result of the virtuous cycle of a growing middle class, growing consumption and productivity growth enabled by  cheap energy and better technology. Global economies have grown constantly, and standard of living have improved but looking forward, the constraints on our natural resources, climate change and other headwinds mean that we are unlikely to see the same rates of growth we have been used to.

A stable and growing economy is reliant on low-cost sources of energy. Inexpensive energy is used to power engines, machines, and other technologies that underpin the modern industrial world. Since the First and Second Industrial Revolutions, consumerism in the global economy has been satisfied, prima facie, using inexpensive (ignoring externalities) fossil fuel-based energy. Early on, the industrialising economy was small relative to the abundance of our natural environment and this led to humanity treating natural resources as a ‘free good’.[6]

Looking at the current growth in the global economy, we can see it has been fueled by increasing global energy consumption, and this positive correlation is depicted in Figure 2. Fossil fuel demand has grown exponentially over a period of 200 years, during which time it has powered industrial development and the growth of financial capitalism.

The bottom line is that the global economy has grown exponentially on the back of cheap fossil fuel-based energy that has been systematically underpriced by markets, because fossil fuel producers have been able to externalise the long-term costs to society and the environment. 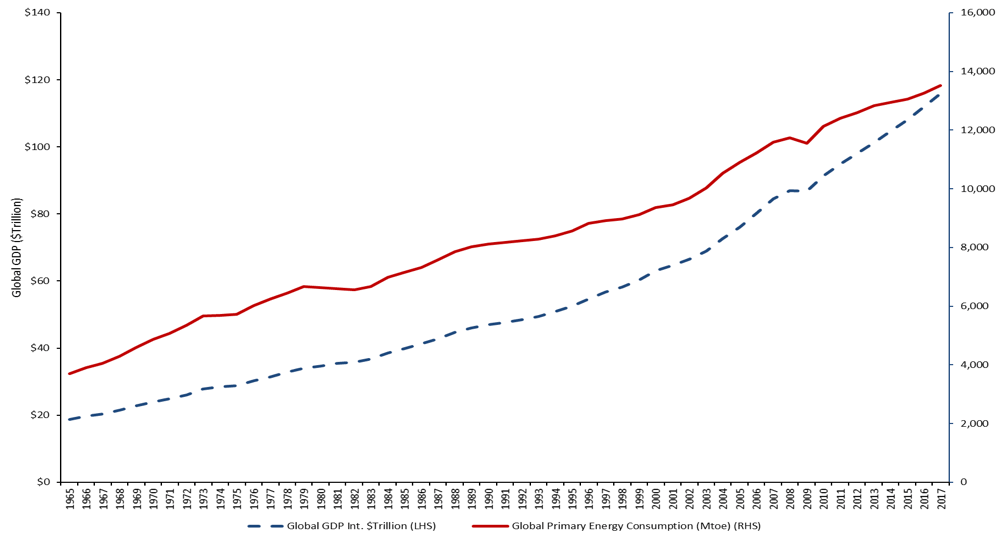 What has been successfully overlooked is that a key problem with fossil fuel-based energy is that when it is used to power the economy it results in large amounts of CO2 related emissions – and these emissions negatively impact the environment. Approximately 85% of the energy that currently powers the global economy is derived from fossil fuels.[7]

The reality is that over the next decade, the global economy will require large levels of sustainable, inexpensive energy to achieve dramatically lower levels of CO2 emissions. And the switch to more renewable energy systems needs to be rapid, if we are to avoid the expensive and potentially catastrophic climate change.

As a result, it is crucial that we correctly price the true long-term cost of depleting scarce natural resources including burning fossil fuels for energy if we are to make the global economy more sustainable and minimise the negative impacts of climate change. The true cost to society of using fossil fuel-based energy needs to be reflected in the market pricing of this energy, through a system of government taxes or related mechanisms.[8]

Climate Change and the potential for future compounding returns

The scientific evidence is overwhelming that burning fossil fuels causes climate change. Despite the doubts spread by other individuals or parties, there is little scientific uncertainty that this large amount of atmospheric CO2 is a key cause of the climate crisis the world is facing. Figure 3 shows mean estimates of the change in global temperatures since 1880. Over this period, average temperatures have increased by approximately 1%.

Figure 3: Change in global temperatures since 1880

According to the US Global Change Research Program, observations collected around the world provide significant, clear, and compelling evidence that the global average temperature is much higher, and is rising more rapidly, than anything modern civilisation has experienced. And the impacts will be widespread. The warming trend observed over the past century can only be explained by human activities and their effect,  in particular emissions of greenhouse gases.[9]

The potential disruption from climate change to both the economy and the ecological systems humans rely on, is a real and significant risk. More extreme weather, floods, droughts, heat waves, super storms and changing weather patterns are likely to adversely affect agricultural production, and reduce productivity levels over time.

It is estimated that climate change will result in significant changes to the geographic distribution of the supply and demand of goods and services, redefining global trade. It is also likely to fundamentally affect migration flows and result in the loss of land and capital infrastructure due to higher sea levels. According to the Stern Review on the Economics of Climate Change (2006), economic models estimate that the overall costs and risks of climate change will be the equivalent to losing at least 5% of global GDP each year, now and forever.

Unfortunately, this greater than 10-year-old estimate by economist Nicholas Stern for the British Government is now considered to be conservative. More recent estimates suggest that limiting global warming to 1.5 degrees Celsius will result in trillions of dollars in savings (through economic cost avoidance) compared with allowing temperatures to rise 2.0 degrees or higher.[10]

If the world accelerates the switch to renewable energy, then the long-term cost to the overall economy and ecological systems will be minimised, but the disruption to the traditional fossil fuel industry and related industries will be massive. The move to renewable energy and actions to halt global warming will have serious consequences for the financial markets as the values of coal, oil and gas assets (worth an estimated $US25 trillion) evaporate.[11] The aggregate demand by humans on natural capital resources is outpacing the rate at which natural resources can be renewed.

Figure 4 illustrates that the world has been in a natural resource deficit for an extended period and this deficit has been growing. The biocapacity equivalent of 1.69 Earths was needed to provide the natural resources and services humanity consumed in 2014 and CO2 production from burning fossil fuels representing 60% of humanity’s ecological footprint.[12] 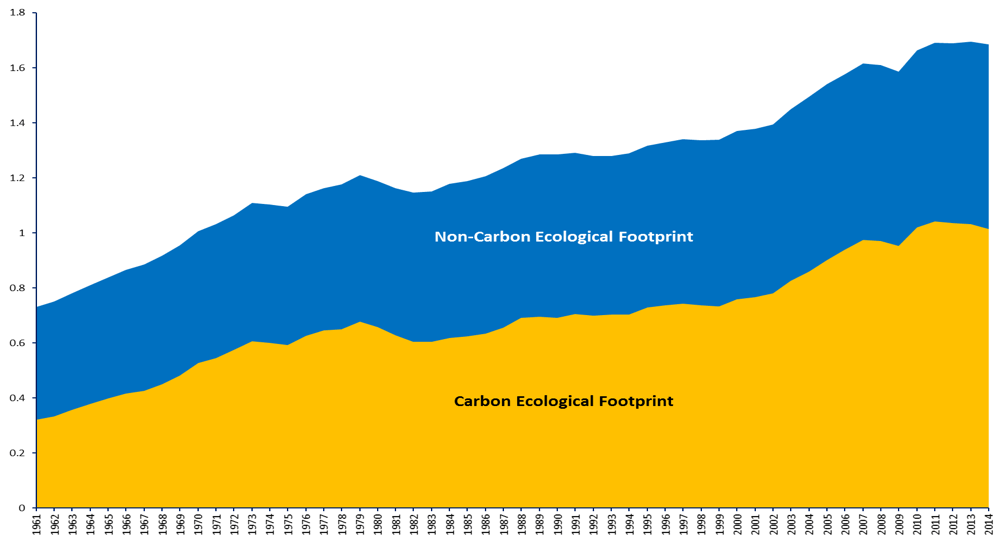 The importance of identifying companies less vulnerable to climate change

Climate change and the growing resource requirements of the global economy are pushing up against the finite ecological resources of the natural world – which will naturally affect businesses.

In our view, stocks which are well-positioned for the disruption to the economy as society shifts from fossil fuel-based energy to renewables will perform better than those which are not. Traditional assets, networks and utilities based on fossil fuels will eventually be disrupted and replaced by distributed energy systems. For example, the time will come when households have the ability to capture, store and share cheap renewable energy using solar panels and batteries – and their need for fossil fuels will be far less pressing.

The cost of renewable energy has declined dramatically in recent years, making large-scale energy production from wind, solar and hydro feasible. This is good news, as it signals the transition to a phase of decentralisation of energy production and storage

In our view, structural disruption due to renewable energy is likely to be far-reaching, initially impacting resource, utility, transport and infrastructure sectors. Further, the finite nature of our natural resources makes unbridled consumerism unsustainable.

As a result, we expect the benefits of compounding returns across the board to be dampened going forward. Growth will not be as widely spread across the economy but rather limited to the disruptors in certain sectors of the economy or individual businesses. It is our view that capital-heavy, CO2 intensive businesses will struggle to compete going forward, and that it therefore makes sense to limit investment exposure to these industries. On the other hand, if we are able to successfully identify disruptive businesses, these are the companies which have the potential to experience strong growth in a weakened economy.

We expect the rate of growth in the global economy to decline over the coming decade and beyond due to several structural headwinds. One of the most challenging of these is the constraints on our natural resources, and the environmental impact of using fossil fuels as our main source of energy.

Long-term investors who ignore the impact of climate change and the imperative to reduce our reliance on fossil fuels will do so at their own peril.  In our view, investment portfolios with direct exposure to fossil fuel-based energy businesses, utilities or the resources sector will struggle to compete with those more attuned to our changing economy and the headwinds it faces. Disruptive businesses, those with large and growing addressable markets, and which do not rely on economic growth but rather on  a strong business proposition to grow their revenues and profits will be in a position to grow at rates well above that of the overall benchmark during periods of subdued economic growth.

[[3] Prosperity without growth: Foundations for the economy of tomorrow, Tim Jackson

[4] Prosperity without growth: Foundations for the economy of tomorrow, Tim Jackson

This article was written for and originally published in Money Management.